Often, the staking of territory for the establishment of Empire does not begin with intentions of constant relocating, renaming and rebuilding of the capital city. However, this transpires with the capitals of a number of regional powers, including the Kongo Kingdom. Taking into account the kingdom’s destabilization through neighbouring invasions and conquests of the Jaga peoples and the Kingdom of Ndongo (currently Angola), it is no wonder that the structures of Sāo Salvador, or Mbanza Kongo as it was later to be called, dissipated and eventually collapsed after exceedingly rapid development, growth of smaller political units and internally contesting factions.
David Birmingham, one of the more respected, critical historians of the Kongo region, discusses the shifting of the capital city in his text Trade and Conflict in Angola. According to some sources, allegedly the first king of Kongo conquered the province of Mpemba shortly after the beginning of the 15th century, and “On his way south he stopped at Mpemba Kazi (Npembacasi)… [and] he moved his capital further south to Mbanza Kongo… Linguistic evidence seems to support this tradition and suggests that the region of Mpemba Kasi, and not that of Mpemba Kongo, is the central area of the Kikongo language.”[1] Though documents challenging this move do exist, Birmingham seems fairly certain that this move made economical, political and strategic sense for the incoming leader of the Kongo. For one, Mbanza Kongo (also referred to as Sāo Salvador during certain centuries), remained deep enough inside the kingdom that the surrounding coastal states to the east and south (Nsoyo and Mbamba) and the bordering inland states to the north and west (Mbata and Nsundi) provided important buffers from Europeans and central African states alike. Additionally, the city was well situated on a highly elevated plateau, protecting it from unwanted attacks, though accessible for inland couriers to deliver taxes from neighbouring provinces. 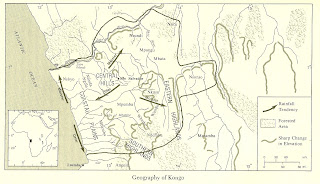 Geography of Kongo (Thornton, Kongo Kingdom pp. 5)
Mbanza Kongo benefited greatly from these taxes of its prosperous neighbour states, and there emerged two distinct classes in the mid 16th century: that of the laboring, rural peasantry largely residing in the surrounding states, and that of the noble aristocracy in the capital state of Mpemba. When King Garcia II occupied the throne in 1641, the Kongo Kingdom was at the height of span of empire as Thornton describes, “In his day, the population was somewhat over half a million people living in an area of some 130,000 square kilometers, although Kongo’s claims extended to a larger area than did its effective rule.”[2] 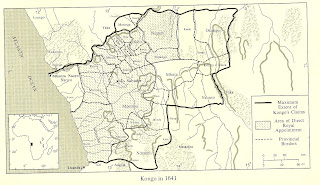 Extent of Kongo Kingdom 1641 (Thornton, Kongo Kingdom pp. 40)
Slaves were relied upon greatly for their labour in the Kongo Kingdom, and the management of agriculture production and trade resulting in a surplus of foodstuffs that allowed the capital Mbanza Kongo and the Atlantic city Mbanza Nsoyo to enjoy high levels of luxury.[3] However, it would in part be this coastal city’s rise to power that would challenge the dominance of the capital, “The erosion of Sāo Salvador’s [Mbanza Kongo’s] place at the center of Kongo came about, not through Sāo Salvador’s decline, but through the rise, almost accidentally, of a new town center at Mbanza Nsoyo on the Atlantic coast.”[4]
Thornton’s text on the civil war between the kingdoms of Kongo and Ndongo (Angola) reveal the complexities of the nation-states’ claim to sovereignty between the mid 17th and early 18th centuries. Rapidly growing with strength, Nsoyo began to challenge the ruling state of Mbanza Kongo in Mpemba, and the other surrounding states similarly began to unite as contesting factions. In the middle of the war in 1672, King Pedro III of Kongo emerged temporarily as victorious, but chose not to remain in Mbanza Kongo because he believed it too vulnerable to the encroaching warring states, thus “Kongo lay in ruins, its capital destroyed, its ruling group dispersed, and its politics now dictated more by Nsoyo than by internal forces. Kongo’s great centralized power, which had been at its height just a quarter-century before, was no more.”[5] During this time, the Portuguese began exploring Angola as a new possible territory of Christian conversion and resource exploitation, and this greatly unnerved Kongo leaders, who wished to remain direct rulers of the routes of trade in central Africa. 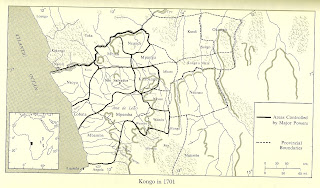 Collapse of Kongo Kingdom (Thornton, Kongo Kingdom pp. 105)
While the states of the Kongo Kingdom warred with itself then, the Kingdom of Ndongo (Angola) slowly emerged as a new power in the region, and allegiances were dashed as the two nation-states quarreled over trade opportunities with the Portuguese. Though the kingdom of Kongo was not quite defeated, it would take decades for the empire to rebuild, and Thornton concludes his thoughts on the end of this era of Kongo history by noting, “The rivalry between Nsoyo and Kongo, combined with the instabilities of the lineage struggle and the losses to Portugal at Mbwila, had blown it [the capital Mbanza Kongo] apart. With its reconstruction by King Pedro IV some thirty years later, it was to be built upon entirely different principles and with an entirely different structure.”[6] While 1718 did not mark the immediate end of Mbanza Kongo then, it signaled the final end of its era of empire, one that would not return to a height of ascendancy like that of the Kongo Kingdom for many years to come.
[1] David Birmingham. Trade and Conflict in Angola: The Mbundu and Their Neighbours Under the Influence of the Portuguese 1483-1790. Oxford: Clarendon Press, 1966, pp. 7.
[2] John K. Thornton. The Kingdom of Kongo: Civil War and Transition 1641-1718. Madison: The University of Wisconsin Press, 1983, pp. xiv.
[3] Thornton, pp. 18.
[4] Thornton, pp. 54.
[5] Thornton, pp. 82.
[6] Thornton, pp. 83.